Beijing is a great destination to explore for all those who are looking for a China tour. As the capital of the nation for over 800 years, the city is a cultural and political hub as well as home to some of the finest remnants of China’s glorious imperial past. Beyond the rich culture and history to reveal, a tour to Beijing also offers visitors the chance to soak up in the modern thriving atmosphere. With the experience organizing numerous Beijing tours in particular and China explorations in general, our local expert highly recommends you top 20 things to do and see when you set your foot in the capital.

1. Climb on the Great Wall

The renowned Great Wall is no doubt is on the list of any China tour itinerary. This majestic World Heritage Site scales an area of 4000 miles offering tourist several sections to choose from, both restored and rugged ones. Mutianyu section is suitable for taking an easy walk while the wild walls of Jinshanling or Jiankou are more challenging yet worth the most picturesque sceneries. For a once-of-a-lifetime experience, it is highly recommended to have an overnight in a beautiful water town in the Simatai section and admire the marvelous night views of the Great Wall. 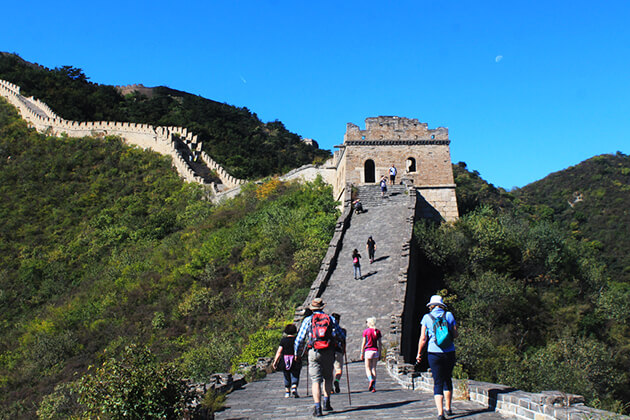 The Forbidden City – the best-preserved imperial palace throughout the country is the royal residence of 24 Chinese Emperors in over 500 years. Walk across the grand halls and walls displaying the essence and culmination of traditional Chinese architecture, reveal the hidden treasures of the palatial complex, as well as discover the historical and cultural stories behind, expanding to the emperors’ lives, imperial examinations, and worship. 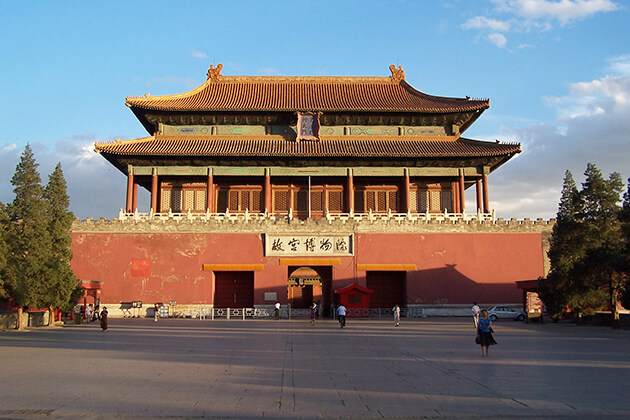 3. Stroll in the Fabulous Summer Palace

The Summer Palace is a harmonious ensemble of lakes, gardens, and palaces located in Beijing. This masterpiece of Chinese landscape garden design was first built in 1750 and restored in 1886 after serious damage by wars in 1860. Visiting the tranquil Summer Palace to stroll along the long corridors, admire the exquisite paintings on the ceilings and take a pleasant dragon boat trip on Kunming Lake is a highlight of your China package tour. 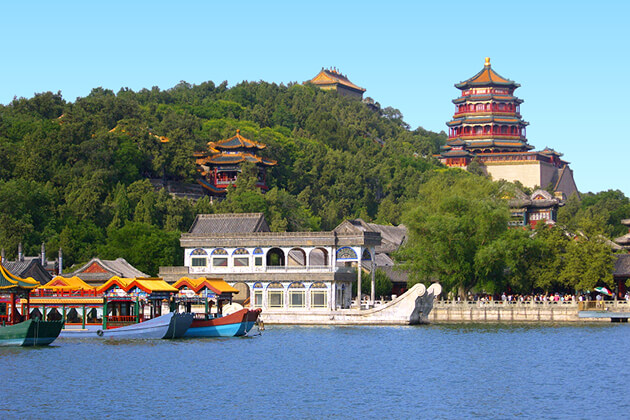 Known as one of the world’s largest public square, Tiananmen Square is a majestic area which can accommodate a million people. Like Times Square in NewYork City and Red Square in Moscow, Tiananmen Square is a must-visit place for travelers to Beijing. In this remarkable square, you can pay a visit to the Tiananmen Tower, Monument to People’s Heroes, Great Hall of the People, Chairman Mao Zedong Memorial Hall and witness the national raising ceremony.

5. Take a Rickshaw Ride through the Hutongs

Travel in time back to the old days of Beijing with a rickshaw ride through the mazes of narrow lanes linking traditional one-story courtyard houses. There are no better places than Hutongs for tourists to catch a wonderful glimpse of the traditional Beijing life. Visiting a hutong family to have an authentic experience of local lifestyle and discovering the most interesting hutong lanes will be memorable moments to all Beijing visitors

There must be a reason for the saying “There are two things you must do in Beijing: eat Beijing Roast Duck and see the Great Wall.” The Peking Roast Duck is the epitome of Beijing cuisine, gaining fame throughout the country and even internationally for its thin crispy skin, and the indulging flavor. Your tour to Beijing cannot be completed without having a taste of the authentic Beijing roast duck in time-honored restaurants, namely Quanjude or Dadong. 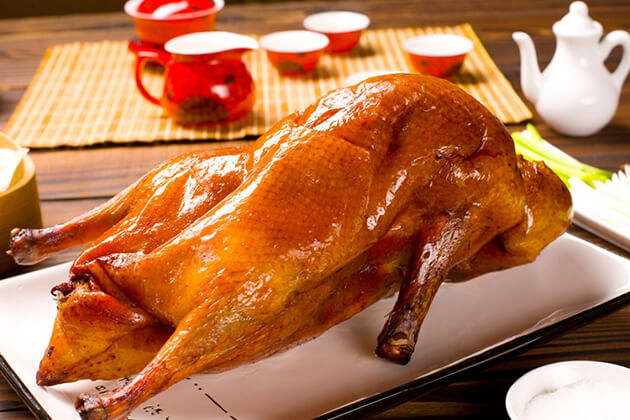 7. Pay a visit to the Temple of Heaven

Not only depicted as a masterpiece of architecture and landscape design, but the Temple of Heaven is also considered as the most sacred of Beijing’s imperial temples. Previously, it was the place where Chinese emperors paid the homage to heaven and prayed for the peace and good harvests for the whole country. Moreover, the Temple of Heaven Park is a great destination to wander around in the morning to watch the peaceful lifestyle with the locals doing Tai Chi, playing chess, singing, and dancing.

For those who are interested in the urban culture of Beijing, 798 Art District is a must-visit destination. Located in the northeast part of the city, once the site of several state-owned factories, this complex began to attract artists and cultural organization in the late 1990s and then transformed to into galleries, studios, art centers, restaurants, and bars in the early 2000s. Today, 798 is a bustling area where tourists witness the perfect blending of history, reality, the industry and the arts with the bright pipes, exposed walls, graffiti, gallery theaters cafes, and craft stores everywhere. 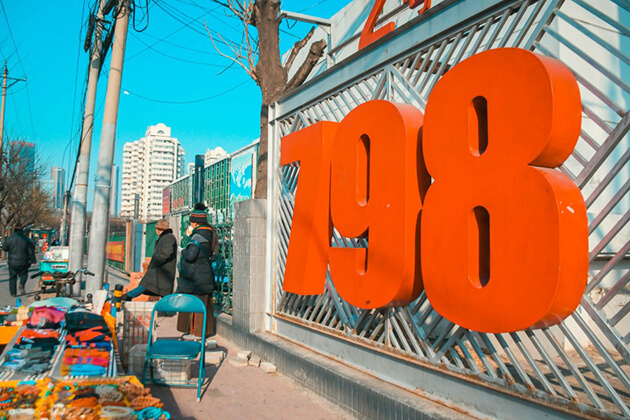 Among the myriad of Chinese opera, Beijing style is one of the most notable and gains global recognition as well. The Peking opera show is highlighted with glorious customs, elaborate makeup, amazing acrobatic moves, and its unique vocal style. You can attend a show almost every night in the capital and the best places to visit are the significant National Center for Performing Arts and the Liyuan Theater where tourists can even come early to watch the performers applying their make-up.

10. Take in the Nightlife in Sanlitun

To soak up in the vibrant atmosphere of Beijing, head to the famous Bar Street – Sanlitun which offers foreigners and young Chinese with various drinking establishments. Wander a little bit and you will find the place of your style. College students love to hang out at the east side of the street, check two clubs on the northern gate of the Workers Stadium, Vics or Mix if you love to dance, while Q Bar in the south of Sanlitun serves you good cocktails in a pleasant terrace.

Panjiayuan Antique Market is the largest antique market in China, home to open-air stalls of more than 3000 venders hawking cultural revolution memorabilia, artwork, cloisonné, ivory carving, jade dragons, jewelry, and much more. You can find yourself several interesting souvenirs and old crafts there. However, bear in mind that some of the antiques sold are fake and like other markets in China, be prepared for bargaining aggressively. 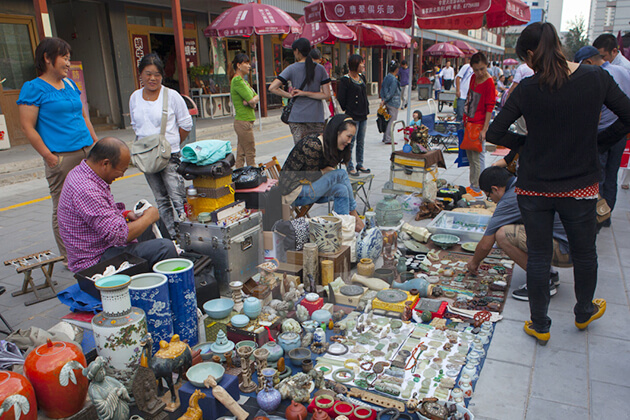 12. Have a Taste Beijing Local Snacks

Set your foot in Beijing, remember to try Beijing local snacks varied from fried dough rings, doornail pasties, sugarcoated haws to rolling donkeys and more. For those who are enthusiastic about food, Nanluoguxiang, Ghost Street, and Wangfujing Snack Street are the best places to taste these famous snacks. As many authentic snacks are hidden deeply inside hutongs, accompanying with a local expert to helps you reveal the hidden delicacies.

13. Catch a glimpse of the Old Summer Palace

Like the Summer Palace, the Old Summer Palace was once the emperor’s retreat. After being seriously destroyed by French and British troops in 1860, however, this beautiful imperial garden could not restore its original glory. Thousands of palaces standing here, most of which were made of wood, were burned to the ground and only European – style stone structures remain. Thus, the destination offers tourists rather different experience when admiring the ornately carved columns, scattered stone blocks, and Huanghuazhen a maze made of engraved concrete walls surrounding a European –style pavilion.

14. Enjoy an enthralling night show of Kung Fu or Acrobatics

Watching a show is an exciting way to spend your night in the capital city Beijing, and both Kung Fu and Acrobatics Show are good options. Attend the Legend of Kung Fu Show to be stunned by the fast-paced plot and impressive martial art skills or visit the Chaoyang Theater for admiring the flexible feats involving ballet, human strength, jumping hoops, rotating plates, chairs and umbrellas. These breathtaking and thrilling performances can please all ages, both children and adults. 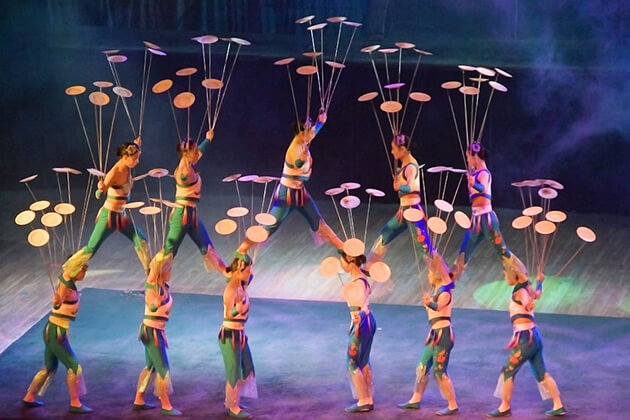 The Beijing Olympic Park will remind the tourists of the excitement of the 2008 Summer Olympics. In the visit to the park, it is impossible to miss the two landmarks Beijing National Stadium, better known as the Bird’s Nest which is the world’s largest steel structure and the National Aquatics Center or also called the Water Cube recognized for its unique and inspired design based on the bubbling soap. Notably, as the night falls, these architectures are on the magnificent light show, which is the perfect moment to take amazing photos.

Beihai Park, located on the northwest of the Forbidden City, is one of the oldest and most representative imperial gardens in China. Covering an area of 71 hectares, Beihai Park is home to Beijing’s largest and most beautiful public lake as well as pavilions, bridges, and gardens. Take a stroll around or have a boat ride to admire graceful scenery with flourishing trees and blooming flowers in the park. Moreover, continue to the north, you will have a further visit to the two connected lakes Quahai and Houhai and catch a glimpse of local lifestyle from restaurants, bars, and hutongs on the shore. 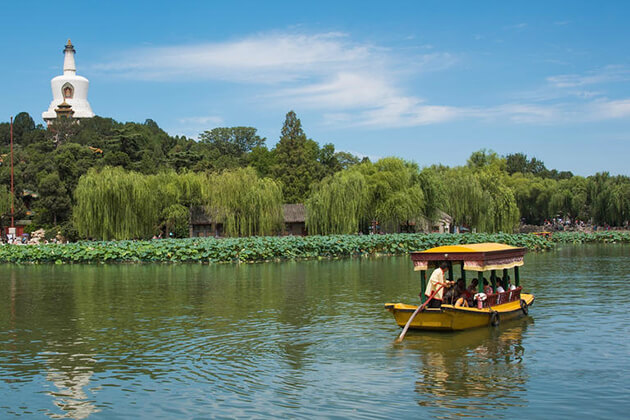 The Lama Temple originally built as the temple to honor the Prince Yongzheng is one of the most important Buddhist temples in Beijing. This structure facing the south with five main halls on the axis as in the typical Chinese temple layout is home to three world records as the largest wooden Buddha which is carved from a single piece of sandalwood, the bronze Buddhas of the past, present, and the future, as well as 500-Arhat Hill.
The temple is the best for visiting at a slow pace. Wander around and have a closer look at the practice of burning incense as an offering to Buddha in this local’s favorite place of worship. 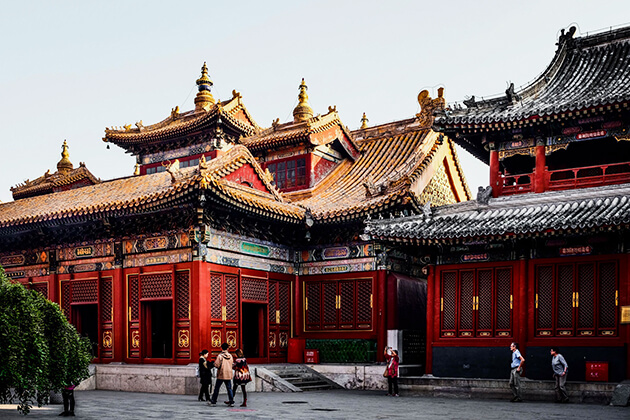 18. Making Local Dishes with Your Own Hands

For fresher experience within your tour to Beijing, besides simply visiting the architectural structure do not miss the chance to take a cooking class with a Hutong family. Have an exciting moment as taking part in small classes in English covering everything from hand-pulled noodles, dumplings to Chinese ethnic minority cuisine. Beyond making delicious Chinese dishes on your own, you can also learn to the historical and cultural significance of famous food in China.

Located on the foot of Tianshou Mountain about 50 kilometers to the northwest of Beijing city, the Ming Tombs are the collection of mausoleums of the 13 emperors of the Ming Dynasty. This UNESCO’s World Cultural Heritage Site is the finest example of imperial tomb architecture attracting millions of tourists visiting every year. At this time, only Changling Tomb, Dingling Tomb, Zhaoling Tomb, and the Sacred Way are open to the public. Come to the site to admire the palatial structure, the stone thrones, monumental sculptures of human and animals standing through the long passage of time, as well as gain the insights into culture and traditions of life under the Ming Dynasty.

For the big fan of adorable giant pandas, Beijing Zoo is a good destination to visit. The Panda House is located near the zoo’s entrance gate. Walk through the archway of the two-story building until entering the Panda House where tourists can have a closer look at the black and white bears. Moreover, you might not want to miss the varied marine life as well as the entertaining shows in Beijing Aquarium, which is another attraction of the Beijing Zoo. 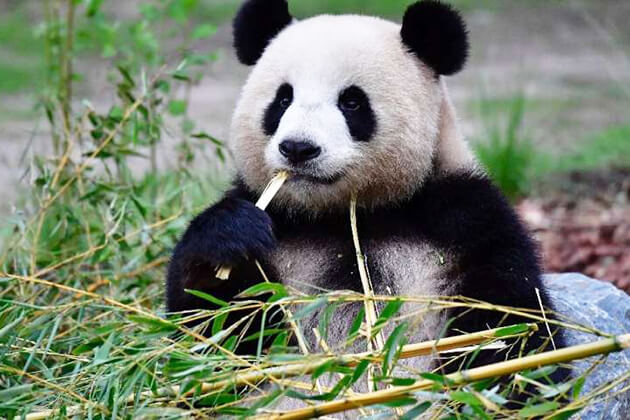