The traditional costumes of countries do not only reflect the fashion sensibility of a nation but also remind us of the important pages in its history, displaying life in the past, its customs, traditions and more. These folk clothes played and still plays such a vital role in the national cultures and are the distinctive features to identify who we are without a saying. Undoubtedly, that is true in China and as one of the world’s oldest civilizations, the Middle Kingdom has much to share with visitors about its traditional clothing. Compared to Vietnamese Ao Dai, Korean Hanbok, and Japanese Kimono, you might ask what is the representative for China? Is this Cheongsam, Hanfu, or any traditional dresses of other ethnic minorities living in the country’s vast territory? What is the history behind and the meaning of it? Which factors distinguish Chinese traditional dress from others? Let’s step in the time-honored clothing culture of China to find out answers and get a closer insight into the deep Chinese culture.

The Kaleidoscope of Chinese Traditional Clothing

China is a multi-ethnic country with 56 ethnic groups of people living together, making it a big family. Accordingly, when speaking of Chinese traditional costumes, every traditional cloth of any single ethnic group can be taken as a very concrete example. Despite only making up less than 10% of China population, the ethnic minorities contribute greatly to the glorious multi-coloring picture of Chinese clothing culture with their flowery, colorful, extremely exquisite, and highly distinctive costumes. Even within the same group of people, these traditional clothes can greatly vary among the different branches and regions. 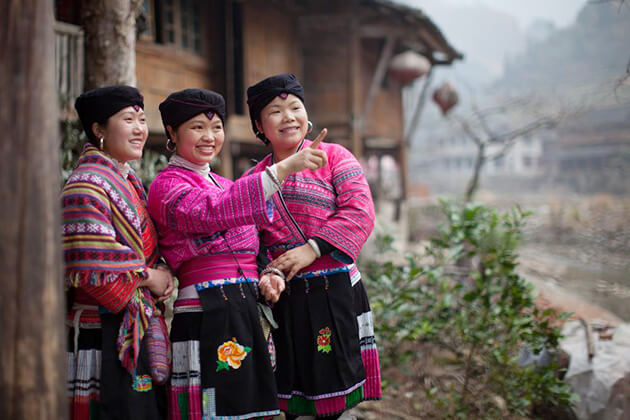 In this picture, Hanfu – the traditional clothing of Han people who account for nearly 1.3 billion out of the Chinese population of over 1.4 billion can be assumed as one of the brightest points. It is derived from the etiquette and culture of the Hua Xia period 5000 years ago. Throughout its development absorbing the peculiarities of different dynasties in Chinese history, Hanfu formed a complete costume system and gained its popularity nationwide under the Han Dynasty. Beyond the aesthetic feeling from its form, the design of Hanfu is also the embodiment of the Chinese philosophy with the core of unity between humans and nature as well as life pursuits. Particularly, the details like “long-wide sleeve” and the “crossed-collar with Right Pattern” reflect the modesty and inclusiveness of the eastern civilization. It is hence natural to state that Hanfu is the most typical Chinese traditional costume and plays a vital role in the country’s culture. 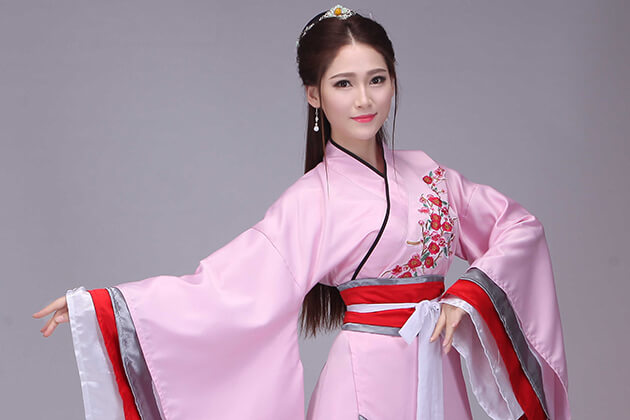 Despite its disappearance in some eras, this traditional Chinese costume still proves its strong vitality and continues drawing more attention from not only the young generations of the country but also tourists during their trip to China.
Beside Hanfu, the world also recognizes the other three well-known distinct types of Chinese traditional clothing, which are Tang Suit, Cheongsam (Qipao) and Zhongshan Suit.

This word comes from overseas Chinese people, referring to a type of Chinese jacket. During the period of the most powerful and prosperous dynasty in the history of China from 618-907, Tang Empire was so famous in the world that the traditional clothes worn by these Chinese were given the name “Tang Suit”. In fact, this Manchurian clothing originated back to the Qing Dynasty (1644-1911) has no relationships with the Tang dynasty. Speaking of the design, it is a short tunic fasten down the front with high and round collars and lapels. Once for the noblemen, aristocracy and government officials only, the Tang suit was adopted by the common people eventually and now is seen as the national costume for men, yet women can wear it as well. Chinese people these days love to wear the Tang suit on many occasions, especially the Spring Festival each year. Notably, the Tang suit was also presented to the heads of other foreign countries at the Asia-Pacific Economic Cooperation Summit 2001 held Shanghai in 2001 by the host, Jiang Zemin.

This elegant body-hugging one-piece dress for women was evolved from the Manchu female’s changpao (long gown) under the Qing Dynasty. As the Manchu ethnic people were also called the Qi people, then their long gown comes with the name Qipao. Cheongsam is often fastened with the buttons on the right, featuring a frog (a knob made of intricately knotted strings) and two big openings at either side of the hems to make the movement convenient and charming. It has various styles based on the shapes of collars, the length of openings, the width of sleeves and the position of buttons. The two highlighted versions of modern Qipao, the Bejing-style and Shanghai-style conflicts with each other in both design and colors due to historical factors, which sharply reflect the artistic and cultural difference between the North and South of China. Qipao is not only popular in China but also has been prevailed among women all over the world due to its suitability to women both young and old, as well as the elegant and graceful impression it brings about through exposing the beautiful postures and curves of the females. Beyond a dress, it is the embodiment of Chinses traditional quintessence. 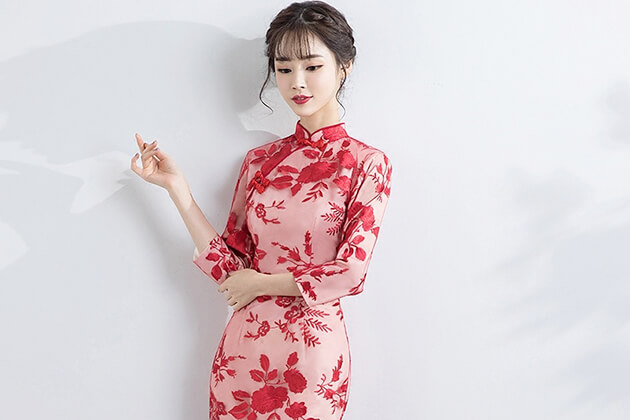 The Zhongshan Suit was designed based on the characteristics of Western suits and Chinese clothes and named after its designer Son Zhongshan. Since its inception, it did gain great popularity among Chinese people, especially during the Republic of China (1911-1949). The cloth features with four pocket representing four virtues (benevolence, loyalty, probity and shame); the five bigger central buttons on the front symbolizing the separation of five powers (administration, legislation, jurisdiction, examination and supervision); and the three smaller cuff-buttons on either sleeve for the “Three People’s Principles” (Nationalism, Democracy and People’s Livelihood). Zhongshan suit is also called the Mao suit as the founder of Peoples’ Republic of China (PRC) Mao Zedong regularly wore it in many important occasions such as the founding ceremony of PRC and inspecting troops, making a tradition for following chairmen of the central military committee of the PRC to wear it when inspecting troops. After China’s opening up and reform in 1978, due to the preference of Western-style suit, Zhongshan suit has stepped down but then found its way into Chinese movies and plays. 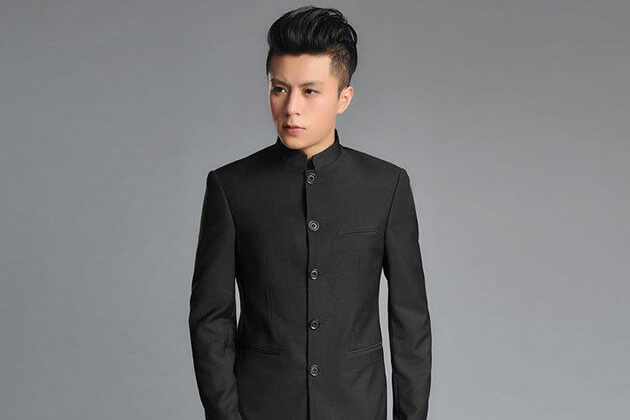 In general, traditional Chinese clothing shares the loose form by adopting the flat cutting pattern, and the emphasis on the overall harmony of the outfit. Embroidery is added to create a highly complex and exquisite look for the costumes. Women’s attires are normally more diverse than men’s with more ornaments, accessories, and styles along with a variety of hairstyles and make-up. In the past, costumes did not only complete the external visual expression but also reflected the social status of the wearers and suited different occasions as well. For instance, light-colored clothing was preferred in daily life, red was worn in most weddings, and white at funerals. In the hierarchical society, the bright yellow clothing embroidered with the dragon was the exclusive affirmation of the power of the king while the number of lions and cranes decorated on the attires of ministers, generals, councilors and their wives was restrictively controlled. For one who was richer or at higher social rank, the more embroidery details and better fabric he could have in his clothes. 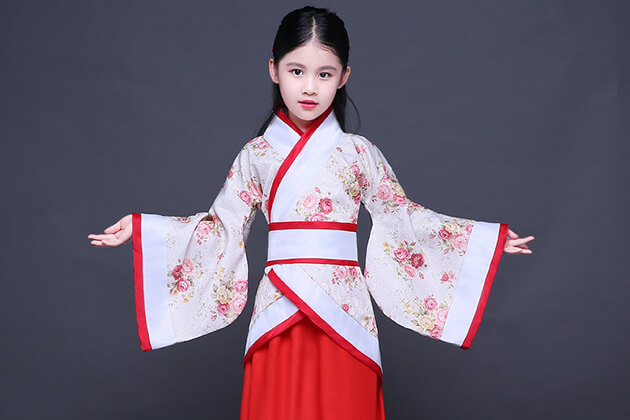