Characterized by different styles and themes, Chinese festivals play an integral part in the time-honored culture and long history of the Middle Kingdom. As the introduction to Chinese nature, traditional festivals have many customs that show the profound links with religious devotions, superstitions, and myths with the dates calculated according to the lunar calendar. Whereas, the holidays in Gregorian calendar relate directly to the modern life of Chinese people. If you are curious about the Chinese intellectual world, you should not miss the following information revealing all about the top major festivals and holidays of China.

Chinese New Year or Spring Festival is the grandest and most important festival throughout the year in China, having a history of more than 4000 years. This jubilant event falls on the first day of the first lunar month and ends with the Lantern Festival occurring on the 15th day in the same month. It is time for the family reunion in China when people make their way home to gather around the table, chat, enjoy the hearty dinner and excitingly wait for new year bell striking. Since the preparation of the festival half a month ahead, the whole country is dominated in the vibrant atmosphere, streets and stores have a glorious look with iconic red lanterns and colorful lights while houses are cleaned thoroughly and decorated with red couplets, Fu character pictures, and window paper-cut. During the holiday, beside the customs such as: new year banquet, ancestor worshiping, fireworks and firecrackers, visiting relatives, giving best wishes and lucky money, etc. people can enjoy performances from the best China’s artists, colorful Dragon and Lion dances as well as variety of Chinese traditional products and special snacks. 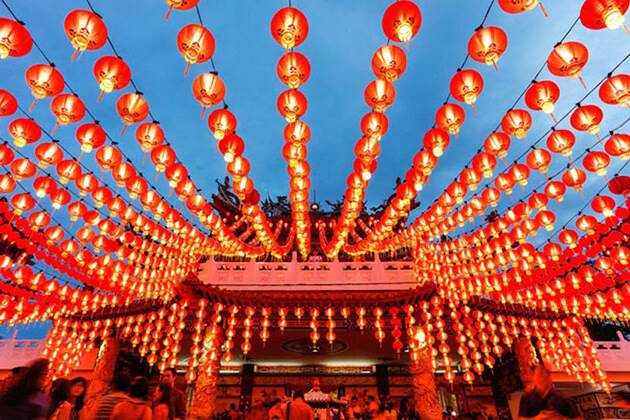 The Lantern Festival marks an excellent ending of the Chinese New Year period. It is a significant feast and the most recreational among Chinese festivals with rich and colorful activities. The history of the festival can be traced back to 2000 years ago at the beginning of the Eastern Han Dynasty (25-220). One of the emperors gave an order to light up the lanterns in all temples, households and imperial places to worship and show respect for the Buddha on the 15th day of the first lunar month. As time passed, this custom gradually became a grand festival that appeals to people of all ages.
Roaming around, visitors can marvel at beautiful lanterns of various types and shapes that demonstrate Chinese folklore vividly. You can also try guessing lantern riddles which is an exciting intellectual activity enjoyed by people from all walks during the festival. Besides, excellent traditional performances add great fun to the Lantern Festival celebration, attracting a lot of spectaculars. Besides, eating yuan xiao, a dumpling ball made of sticky rice flour stuffed with different fillings is an essential part of this day. With the round shape, the dish represents the reunion, harmony, and happiness. As every household tastes yuan xiao and appreciates the full moon during the event, it is also called Yuan Xiao Festival. 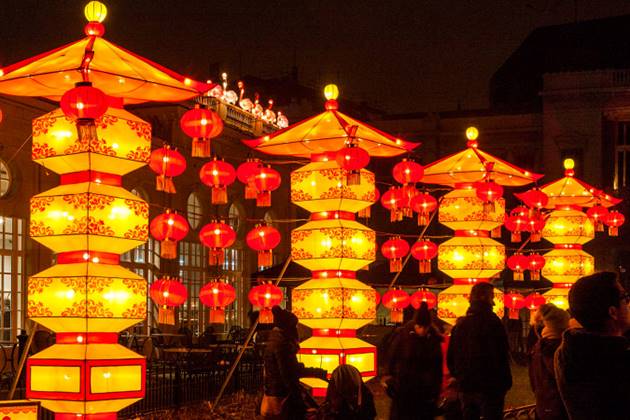 Qingming Festival or Tomb Sweeping festival usually falls on either April 4th or 5th. It is time for Chinese people to show respect to their ancestors as well as go out and enjoy the verdant greenery of spring. Sweeping tombs are regarded as the most important custom in the festival, from which the name of Tomb Sweeping Day is got. People clean weed around the graves and add soil to show care of the dead. The deceased relatives’ favorite food and wine are taken to sacrifice to them along with burning incense and paper money in the hope the dead is not lack of food and money in the spiritual world.
Besides, the festival is the day for people to enjoy themselves and spring out. When March approaches, everything has a new look, trees turn green, flowers blossom, and the sun shines brightly, which is suitable to appreciate the beautiful scenes of nature. Furthermore, flying kites is a favored activity by many people during the Qingming Festival in both daytimes and the evening. At night, kites carrying little lanterns are flown, which looks like adding twinkling stars in the sky. People flying kites in the festival usually cut the string when the kites are in the air instead of reeling it because this practice is believed to remove all troubles and misfortune.

Dragon Boat Festival has been taken place in China for 2000 years. This so-called Duanwu Festival occurs annually on the 5th day of the 5th lunar month to commemorate Qu Yuan a patriot and great poet in Chinese history who chose to drown himself rather than seeing his country invaded and conquered. Originated from south China, the event gain higher popularity in southern areas such as Jiangsu, Zhejiang, Guangdong and Fujian province. As its name suggests, the festival features races of boats with fore and stern in shape of the traditional Chinese dragon. The race comes from the idea of people who rowed the boats to save Qu Yuan after he drowned himself. Today, it has turned to be a sports event held not only in China but also in other countries like Japan, Vietnam, and Britain.

Like many other Chinese festivals having the custom of eating special food, people enjoy Zongzi when celebrating the Dragon Boat Festival. Zongzi is a pyramid-shape stick rice dumpling wrapped in reed leaves with different fillings varying from jujubes in north China to sweetened bean paste, fresh meat, or egg yolk in the south. These days, you can easily find the Zongzi in supermarkets but many families still retain the tradition of making this food at the festival.

Falling on the 7th day of the 7th lunar month, the Qixi Festival is also regarded as the Chinese Valentine Festival. This even is originated from a moving and beautiful love legend about a fairy and an oxherd, Zhi Nu and Niu Lang. Despite belonging to two different worlds, they fell in love with each other, married and lived happily together with Niu Lang working in the field and Zhi Nu weaving at home. It could not ask for more when they were given a boy and a girl. However, the good time did not last long as Zhi Nu was taken back to heaven. Niu Lang flew to heaven along with the two children to pursue his wife. It was the time that the couple could reach to each other, a goddess of the heaven separated them with a huge river of stars Tears from the two moved the goddess and she allowed them to meet the other once a year only on the 7th day of the 7th lunar month.
Traditionally, girls pray to Zhi Nu for the skillful hands for sewing and sweet love on the occasion of the Qixi Festival. They join competitions to show their needlework skills and prepare tables of offering to worship the Vega star. Unfortunately, as time passes, many customs of the festival have changed or been lost, and you can witness their practice in some rural areas only. These days, people usually celebrate the festival by giving flowers, chocolates, and other presents to their sweethearts, instead of the traditional customs. But still, the legend of Nui Lang and Zhi Nu has taken deep root in Chinese people’s hearts and been passed down from generation to generation.

The mid-autumn festival which occurs on the 15th day of 8th Lunar month to celebrate the time the moon is at its fullest and brightest is observed in many East Asian communities. But unlike the Tet Trung Thu in Vietnam that is more like a children day, the festival in China is about a family reunion, similar to Thanksgiving of western countries. It is the second grandest event only after the Chinese New Year. Mid- Autumn Festival is an inherited custom of moon sacrificial ceremonies and has a history of over three millenniums.
The common customs on the festival day include family members gathering around to offer sacrifice to the moon, sharing the moon cakes while appreciating the moon at its most beautiful time of the year. Also, there will be a magnificent lantern display as well as various exciting regional activities, for example, the unique fire dragon show held in the Tai Hang neighborhood of Hong Kong. 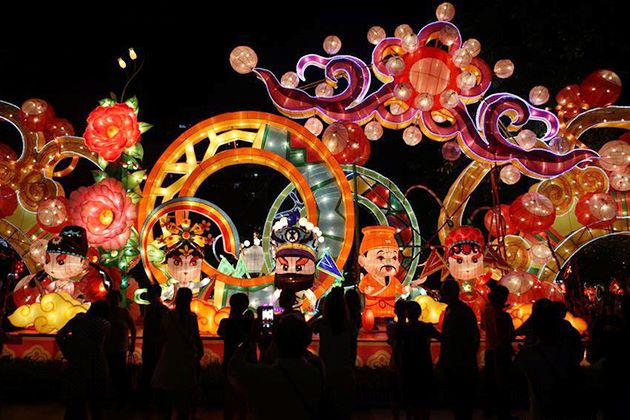 Double Ninth Day occurring on the 9th day of the 9th lunar month is also known as Chongyang Festival. In Chinese, yang means masculine while Chong means double, so the name Chongyang comes from the festival day with two yang numbers. Like other traditional festivals, Double Ninth day has its own legend. It was about a man named Hengjing who went through extraordinary lengths to find an immortal to teach him swordsmanship to expel the devil who caused disease in the Nu River neighboring area. He succeeded in defeating the devil by using his sword along with the dogwood and chrysanthemum wine. 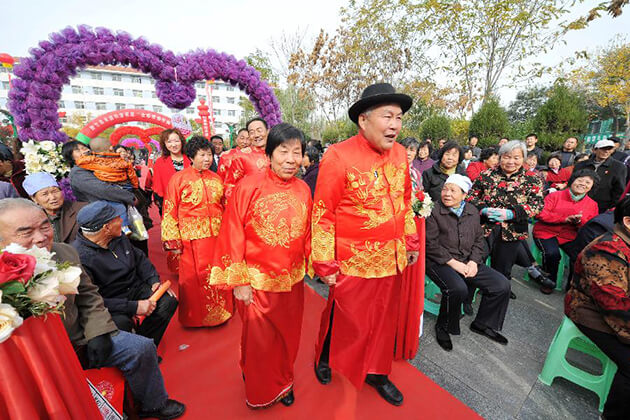 These days, people would love to gather with their relatives or good friends to climb the mountains, admire the beautiful chrysanthemum, and join the joyous atmosphere of the festival. The traditional cuisine of the event includes Chongyang Cake, steamed caked having two layers with nuts and jujube sandwiched between them and chrysanthemum wine that can drive the evil away. Besides, Double Ninth Day was also designated as the Chinese Senior’s Day in 1989, a day to respect the elderly and let them enjoy themselves. Companies organize the groups of retired people to climb mountains or go on other outings. Family members usually accompany their elders in the trip to enjoy the natural beauty while wishing them healthy and happy.

Hungry Ghost Festival is among several Chinese traditional festivals to worship the ancestors. It is held on the 15th day of the 7th lunar month that is also known as the Ghost Month. There are many opinions about the origin of the festival. Based on some of the ancient folk religion incorporated in Taoism, it is believed that the hell gates are opened on the first day of the Ghost month and hungry ghosts are released to find food or to take revenge on those who have behaved badly. Some have the belief that the heaven gates are open too, so they worship their ancestors this time as well. The Hungry Ghost Festival falls on one of the most important days in the seventh lunar month. On this day, especially at the night of the full moon when more ways are connecting the dead and the living, people should take more precautions and honor the dead. So, they perform special ceremonies to avoid the attacks and pranks of the ghosts like putting the family’s ancestral tablets on a table, burning incense and preparing food three times that day.

China’s National holiday is celebrated annually on October 1st, marking the beginning of a 7-day holiday throughout mainland China, Hong Kong, and Macau. Falling on the autumn season with the comfortable weather and magnificent natural scenery, this holiday is a wonderful time to travel for many Chinese, making its name Golden Week. As the longest holiday besides the Chinese New Year, it enables both short-distance and long-distance China tours, which then leads to a boom in tourism with an overwhelming tourist crowd. Furthermore, this time visitors can expect a variety of government-organized activities including fascinating fireworks and concerts.

China is one of more than 80 countries in the world that celebrate International Workers’ Day or May Day. May 1st was officially designated as the day to honor all workers by the Chinese government in 1949 and has become one of several public holidays of China since then. Previously the event was more of a political character but today it is a kind of cheerful family holiday. On this day, people meet friends and join various forms of entertainment held in parks, public squares or theaters.