These are several puzzle pieces contributing to the complete picture of traditional dance in China – a unique form of art. Chinese dances express the human emotional shades through rhythm body movement combined with the music and special costumes. A fantastic trip to China will be more impressive if you immerse in Chinese dance with elaborate stylized movements, vivid whirling ribbons, and ethnically diverse costumes. Let experience unique dance to get the beauty of China.

Dancing is an inseparable part of the Chinese millenary history. The recorded appearance of Chinese dance dated back at least since the Zhou Dynasty in 1046 BC. At that time, people considered dance as a ritual and ceremonial activity rather than for entertainment.
After strong influences from Central Asia during several dynasties since then, this form of Chinese art reached a peak in the Tang Dynasty with the highly diverse, cosmopolitan dances and music. However, after this course, it was witnessed a downfall in the dancing art due to the increasing popularity of “foot binding” practice and social restriction on women which virtually eliminated female dancers. Dances were absorbed into Chinese Opera in the Song Dynasty. This combination then became increasingly popular and recorded further development in the next dynasties.
These days, Chinese traditional dances have been preserved and spread out as a distinctive heritage of this country.

They are older forms of Chinese folk dance. These two forms are performed in the Chinese new year and any other festivals. It is easy to tell the difference between them. In Lion dance, two people operate the lion, one at the head and one at the tail of the lion, and another person wearing the masks plays the role of “Happy Buddha”. The dragon dance, otherwise, needs a group of many people performing upon the poles.
Lion dance can differ between the north and the south. Northern Lion Dance in red and orange costumes showing the ferocious and agile character of the animal was once used for imperial entertainment. The Southern Lion is more diverse in color and plays the role of spiritual protection or blessing. 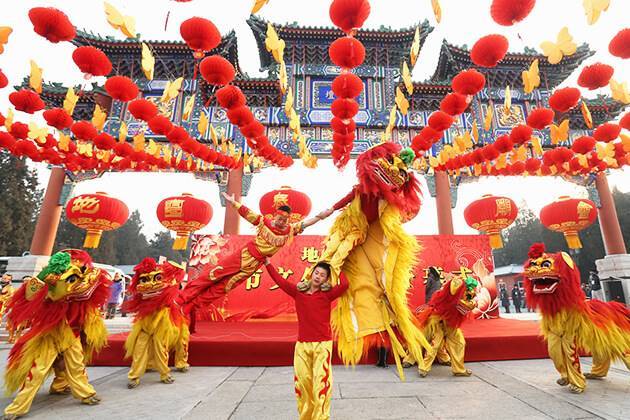 The Dragon dance is believed to bring about luck to people. In the Chinese culture, this symbolic creature represents the great power and dignity, prosperity and auspiciousness. The longer is the dragon, the more luck is it.

Shen Yun is the name of a dance company established to preserve and spread the Chinese5000-year-old dancing art. Every year, they introduce new excellent performances, mesmerizing dances, elaborated costumes, and music of purity. Their performances are introduced all over the world and receive tons of compliments.
Shen Yun performances are based on the foundation of Chinese classical dance – art performance which has the strictest requirements all over the world. The ancient Chinese believed that true art comes from the beauty and purity deep down in the artists’ soul. Following this belief, apart from physical training, Chinese dancers need to nurture their soul to achieve the intimate connection between body motion and inner feelings. This art form involves facial expressions showing inner feelings like love, peace, joy, anger, and disappointment. These feelings also guide the accurate, flexible and elegant movements of the dancers. 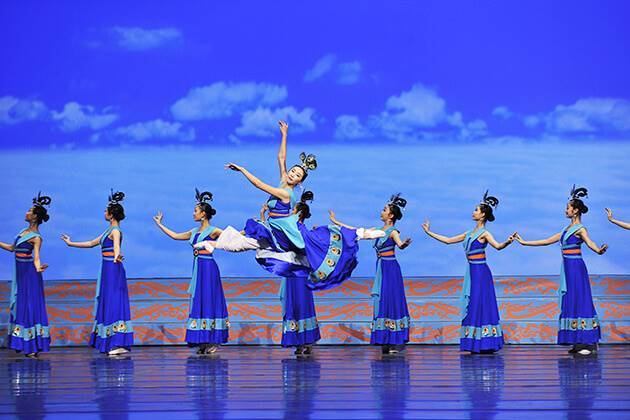 The history of Chinese fan dance is believed to begin during the Han dynasty. It once had its role in both civilian and military. Civilian fan dance was for entertainment, focusing on the graceful and elegant movement, while the military used it for their exercise. In the dance, fans play an important role. Together with the costumes, they accentuate graceful movements, delicate poses and consistent changing body positions under rhythm involving in the dance. With fans, dancers’ limbs look longer, and the choreography and the structure in the performance gain more attraction. These fans are rarely paper fans, but embellished with feathers, jewels, bamboo, or other materials, showing the high level of craftsmanship and creativeness. Performing fan dance is a way to tell stories, share feelings and emotions without any word and to preserve the culture.

The Sword dance or so-called Sword tool dance was popular under the Tang Dynasty and mainly performed as royal entertainment. Like fan dance, sword dance has its role in military life, ancient warriors practice the dance as it resembles the form of material art. In artistic performance, the sword is used for the movement of the dance rather than as a weapon. It can be single, double or dagger sword. The tassels are added for decorating purpose and enhance the amuse of the performance.
There are two kinds of sword dance: moving and standing sword dance based on the use of the sword. In the dance with moving sword, the dancers’ movement should be smooth and flexible like the flowing water to be paired with the continuous snake-like movement of the sword. In the standing sword dance, the movements focus on the swiftness, forcefulness but still keep the elegance and grace. 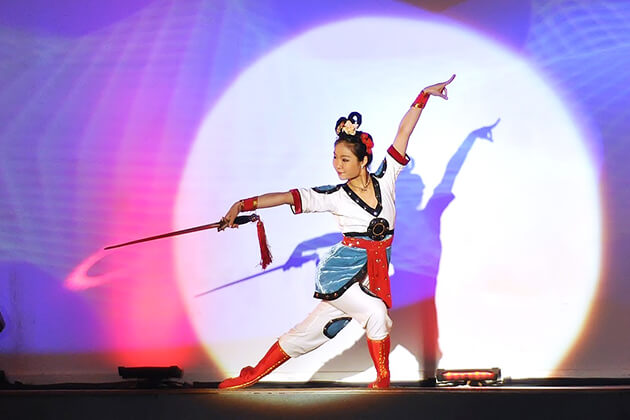 The origin of Chinese Peacock dance was traced thousands year ago in Yunnan, China. It came up after a legend of Dai Minority people. A man saw a beautiful peacock dancing so delicately that he imitated it. In their culture, the peacock represents beauty, elegance, and good luck, and is the animal connected with heaven. Through years, the dance has been developed and become the first National grade Cultural Heritage. In the dance, the performers recreate the living habits of the birds on the stage, flying out from the nests, watching around, finding food and water, taking a bath, etc. through the flexible and graceful movements of knees, arms, wrists, and fingers.

There are 56 ethnic minorities living together in China. As they are characterized in culture, religious belief, and other features, each group of people has their own set of folk dances. These dances play the role as the ritual performance on festive occasions, showing the desire for favors from supernatural or enhancing the bonds among the group. Some common concepts that most ethnic groups share in their dances are: rivalry, jealousy, love, forgiveness, etc, These dances are considered as the national heritage to preserve, and recently they have successfully paved their way to the stage. Tourists can enjoy these unique dances when taking part in Chinese festivals as well. 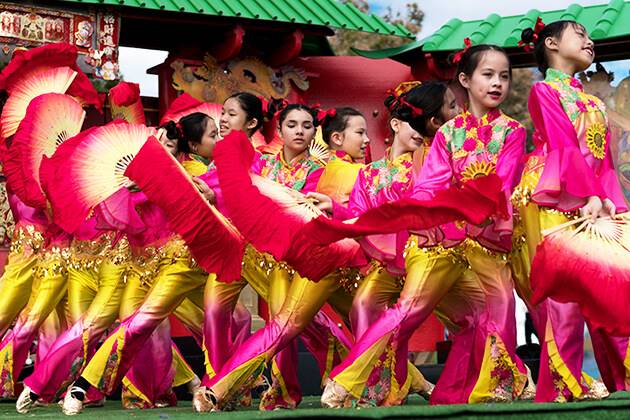