Chinese New Year (Spring Festival) is the happiest holiday season in China and it is also popular in other countries in Asia. On this occasion, people enjoy a lot of fun activities including shopping, decorating their own houses, and preparing plenty of festival food, etc. Below is 19 interesting facts about the Chinese New Year that may inspire you.

1. The Festival For a Quarter of The World’s Population

The world population that participates in the Spring Festival 2021 will be 7.7 billion, not to mention over 2 billion celebrate it in some way. Chinese New Year becomes public holidays in some countries such as Hong Kong, Macau, nine other Asian countries — Indonesia, The Philippines, Vietnam, South Korea, Malaysia, North Korea, Taiwan, Singapore, and Brunei. Moreover, a huge number of overseas Chinese, Vietnamese, etc. also celebrate in many cities like New York, London, Vancouver, and Sydney, the number is estimated to be over 2021 million people who know about the festival in 2021. 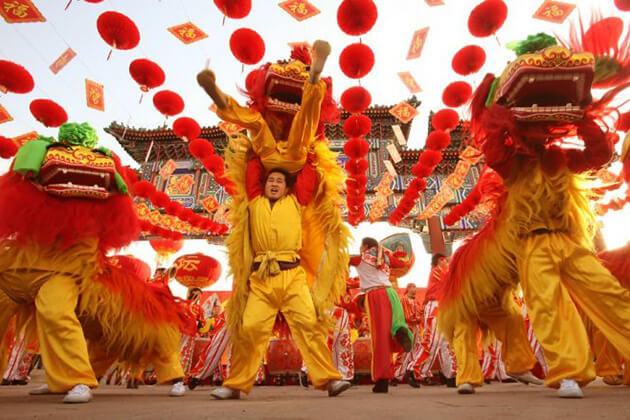 The busy train station at New Year is often seen scene at this time of year. For Chinese people, the Chinese Spring Festival is the greatest chance for them to enjoy a reunion dinner with their families on New Year’s Eve after a year of working far away from their families. Therefore, it doesn’t matter even if they have to travel long distances. That 200 million Mainland Chinese travel long distances for these holidays create the biggest migration per year, which results in 3.5 billion journeys in China. In other countries, that number is about tens of millions of people. Hence, every year people in the world can witness the Spring Festival Travel Rush, especially when traveling to China.

3. And the New Year’s Eve Gala is the World’s most-watched TV Show

On New Year’s Eve, many Chinese people watch the New Year’s Eve Gala on national television. This TV show includes many Chinese celebrities performing songs and dances. It is watched as a family together, they might watch the ball dropping on New York’s Times Square in the USA. This is a great way to introduce a variety of Chinese performance arts.

4. There is the World’s Biggest Annual Fireworks Usage During the Chinese New Year

Another big event of Chinese New Year is a fireworks performance. Every single hour in this vast country people can see many tons of fireworks lighting the sky of China around midnight beginning Chinese New Year. Fireworks are believed to get rid of evil spirits. Most mainland Chinese suppose that the flash and explosion of firecrackers and fireworks scare away demons and evil ghosts. Local governments well prepare for beautiful displays. Fireworks have become the intellectual nourishment for those people who celebrate Chinese New Year. 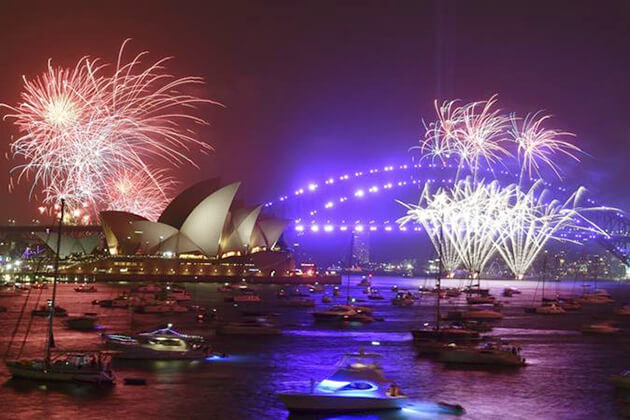 6. The Holiday is Called “Spring Festival”

Because of its celebration time is in spring, Chinese name their New Year holidays ‘Spring Festival’. ‘Start of Spring’ (4–18 February) marks the end of wintry weather and people need to look forward to the beginning of spring.

There are 12 Chinese zodiac animals. Its ordinal arrangements are Rat, Ox, Tiger, Rabbit, Dragon, Snake, Horse, Goat, Monkey, Rooster, Dog, and Pig. 2021 is a year of the Ox.

8. The Festival is Celebrated for 16 Days Till The Lantern Festival

Chinese New Year traditionally lasts for 16 days from Chinese New Year’s Eve until the Lantern Festival. On the evening of the 15th when the moon becomes full families gather for dinner and go down streets to watch fireworks and light lanterns. Lanterns are hung up for decoration (flying or floated ones in rivers).

Other Facts about Chinese New Year

9. The Festival Originated from Fighting Against a Monster

Do you wonder about the origin of the Chinese New Year? It was rumored that there was a fierce monster called ‘Nian’ which would appear every 365 days or 366 days and eat humans. Afterward, people learned that it always came at night and was scared of the red and the sound of the fireworks. Thus, from that on, people started to ease the monster away by setting off the firecrackers, wearing red clothes, and also decorating houses with red. Therefore, the Chinese New Year (also ‘Guo Nian’) has been celebrated to defeat the monster Nian.
Besides, this period was traditionally for praying to harvest gods. The society of Chinese agrarian wants to ensure that their next years will be a fruitful harvest.
Although today China is a great nation with a fast pace of development, praying culture still plays an important role in reminding your ancestors as a family.

10. Billions of Red Envelopes are exchanged

Chinese people like the color red. Giving red envelopes is meant to send good wishes and luck (as well as money). In the Chinese language, red envelopes are called “hong bao”
The elder will give out red envelopes to the younger, also bosses to employees, and leaders to underlings. It is a good time to give New Year’s bonus. In the digital era, many red envelopes are given electronically mostly through WeChat. Red envelopes that people exchange can be small in value but are a great appreciation and the important thing is everyone feels delighted to get “hongbao”. 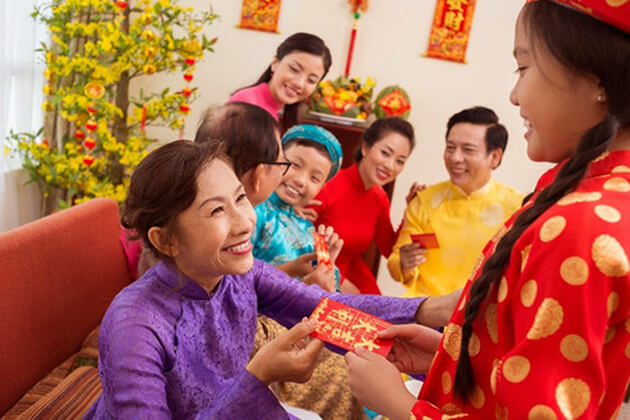 11. Red Decorations are Everywhere during the Chinese New Year

You may know that red is a symbol of luck in China, which represents many positive things such as happiness, beauty, vitality, good luck, success, and good fortune. Apart from the red envelopes, most of the decorations in people’s homes are red. You can see lanterns, red paper cuttings everywhere. Chinese often cut the paper into the animal of that year, for example, they will cut the paper into the Ox for 2021.

There are some taboos people would better avoid, for instance, washing hair or clothes on the first day of the lunar year because it is considered as “washing one’s fortune away”. Sweeping up and taking out the garbage are seen as removing the good luck from the house.
Besides, many superstitions surrounding gifts that people can not ignore during the Chinese New Year period. Pears is taboo because it sounds the same as the word for leaving or ‘parting’ in Chinese.
Giving mirrors is not allowed throughout many of Asia, not just China since they are believed to attract malicious ghosts.

It seems to be difficult to choose a gift, you should keep reading and see some suggestions below. A principle to pick gifts is to identify who you give to. If they are friends, you can think about tea, tea sets, alcohol, or tobacco; while they are seniors, choose something from these: scarves, clothing, gloves, and hats but avoid the green due to its meaning to indicate that somebody is jealous. For kids, you can think along with red envelopes, the lines of books, toys, or school supplies.

14. It is illegal to Set Off Your Own Fireworks in Most Cities

Today, many major cities in China ban people from setting off their fireworks within the city for pollution and safety issues. Instead of that, a lot of official fireworks performances are put in and the governments encourage people to attend those displays. However, you can still see some holes as some people do not follow the rules when you see or hear fireworks and firecrackers bang set off by everybody starting on Chinese New Year’s Eve.

One thing that is enormously important in the Chinese New Year is food. Certain foods are the sense of the festival and are eaten simply for their symbolic meaning. The first one to name is dumplings, which represent wealth. Thus, try to eat as many dumplings as you can to get more money in the new year. Fish is a favorite food since the word for fish in Chinese sounds like ‘surplus’ or abundance in the finance aspect. 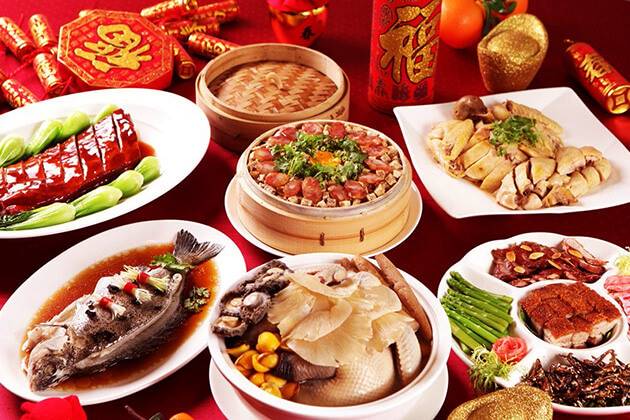 Kids always love the holiday, they can either get a month off of school or receive new things. They are so elated to receive red envelopes. People believe that wearing new clothes can bring fortune and health, thus parents will buy clothes for children to wear for the reunion dinner on Chinese New Year’s Eve.
During the Chinese New Year period, children can get red envelopes from parents, older relatives, and visitors. They have a good chance to “get rich” after this festival. Some of them receive almost 1,500 USD.

18. Fake boy/girlfriends Services Can be Tough for “old” Singles

This fact newly appears in China at New Year. Chinese New Year is a joyful time for most people but singles, especially those above the normal matrimonial age. In China, the marriageable age of females is up to 30, and males before 32. That the young generation keeps being “old” singles makes parents extremely anxious, which urges them to arrange dates for their single children. On New Year’s Eve, “old” singles can cope with the stress of embarrassing interrogations from family members.
To solve this problem, renting a boyfriend or girlfriend for the New Year appears as an interesting, and ridiculous solution. Nowadays, it has become a business with many specialized agents. You can try this service for 16 USD a day.

19. Chinese New Year is A Great Time to Visit China!

All in all, Chinese New Year is a great time to spend a China package tour and enjoy the festivities and China’s winter. Although, it’s the busiest period of transport in China, especially the weeks before and after New Year it deserves to experience