Having been through the passage of 5000 years, Chinese Cuisine is undoubtedly the inseparable part of the Middle Kingdom’s culture. Moreover, it gains fame all over the world for the use of a wide range of selected ingredients, exquisite cooking style and numerous delicious dishes beloved both by the locals and expats. In your China local tours, you must try all these china’s best specialties.

Eating the Beijing Roast Duck is a must when tourists come to Beijing. That dish was a royal delicacy invented in the 14th century under the Ming Dynasty. The way of cooking is now kept as the traditions. The ducks are carefully selected, well marinated, stuffed with the special herbal mixture and then roasted over the fire. A qualified Peking Roast Duck should have the crispy and glossy golden skin, well-tender meat, tasteful flavor and be rich in fat. The way this dish served is also unique and delicate. The duck might be cut into 120 thin slices with both meat and skin in every single one. 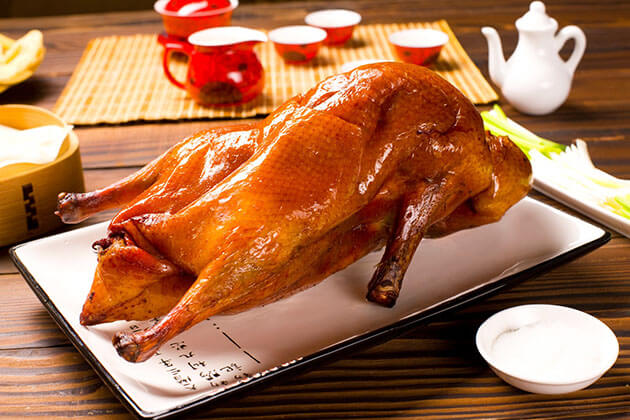 Ma Po Tofu is a typical dish of Sichuan Cuisine which has the hottest and most spicy food throughout China. The history of this tofu is believed to date back to the early time of the Qing Dynasty and still popular now. It will be a pity if you miss the savory flavor of the tender tofu drowned in the hot chili sauce made of mushrooms, ground meat, and chopped green onion. Hot rice and Ma Po Tofu is such perfect couple that you cannot make yourself stop eating. 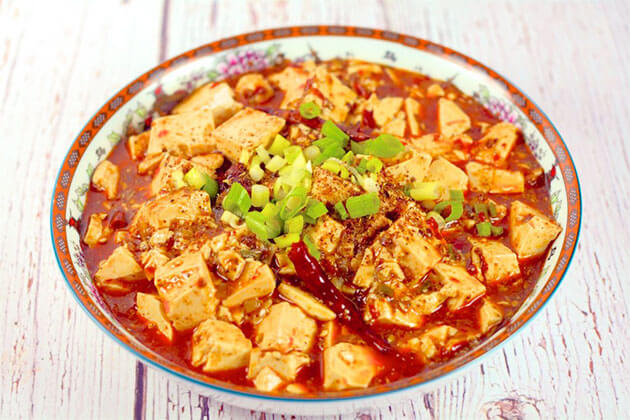 Yangzhou Fried Rice has its origination in Jiangsu Province under the Qing Dynasty. The way of cooking involves various ingredients carefully prepared, finely cut and fired with rice cooked in chicken stock. The food dish is famous and appears in almost every menu of Chinese restaurant all over the world. Although you have not heard about Yangzhou Fried Rice, you might have tried it. Yet, it will be nothing better than tasting the original flavor of Yangzhou Fried Rice in your trip to China. 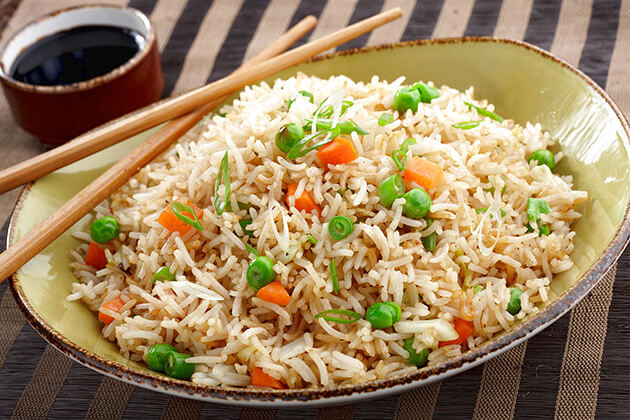 The name Fo Tiao Quiang, or “Buddha leaps over the wall” in Chinese came from the poem written in the Qing Dynasty, saying that the savor of the dish is so good that the monk wants to jump over the wall to try it despite his vows to be a vegetarian. This previous royal delicacy requires a very sophisticated way of cooking. The recipe can have up to 30 precious ingredients such as shark’s fin, abalone, sea cucumber, chicken, ginseng, etc. and 12 seasonings. Therefore, it is expensive and usually served on formal occasions to distinguished guests. 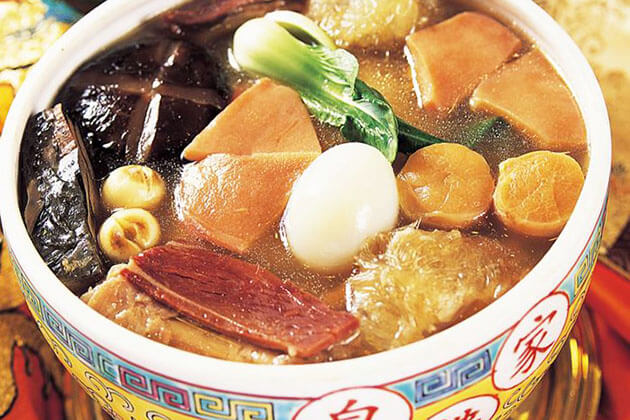 Century egg or so-called thousand-year-old egg was accidentally discovered by a farmer while working on the fields. The egg is not preserved as long as the name suggests but only for a short time of several weeks or months in the combination of clay, ash, quicklime, and salt. After that, the yolk will turn to dark green, grey color, and have creamy flavor while the white will become salty dark brown translucent jelly. Previously, this dish was only served to the royal, important guests, or in festivals and New Year Eve. Now, Chinses people love to enjoy Century egg for their breakfast. 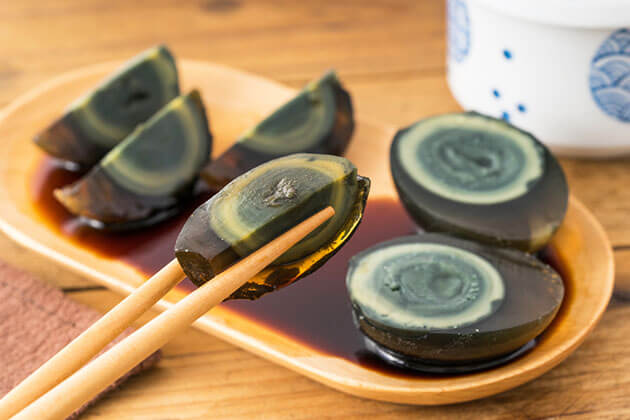 The dish common in Chinese movies is notorious for its smelly odor. At first, it might need a little courage to overcome its “fragrance” to have a bite on Stinky Tofu. However, believe me, the flavor has nothing stinky and probably you can fall in love with it as many people do. The dish is generally a street food coming out in night markets and often grilled, fried or served differently depending on the regions. Tasting the Stinky Tofu will be a one-of-a-time culinary experience that you should not miss in the journey exploring China. 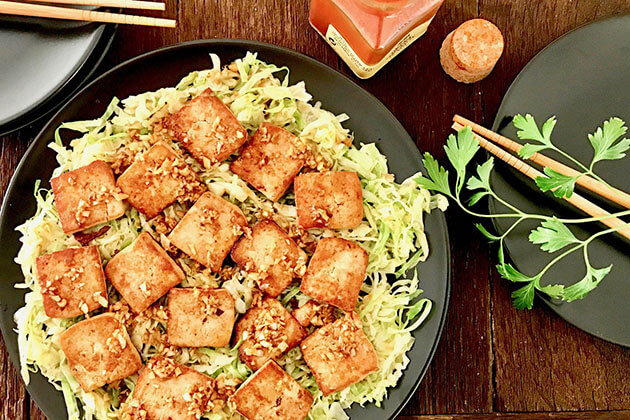 This Hangzhou’s typical dish was named after a famous poet and scholar under the North Song Dynasty, Su Dongpo. The pork belly is cut thick, about two-inch-square, marinated in soy sauce, special Shaoxing wine as well as other seasonings, then slowly stewed. After slow cooking, meat has the delicious brown look, absorb these other ingredients’ flavors balancing the lean and fat parts, and become so tender that you feel the meat is melt in your mouth. Dongpo Rou can be served with hot rice and boiled vegetable. 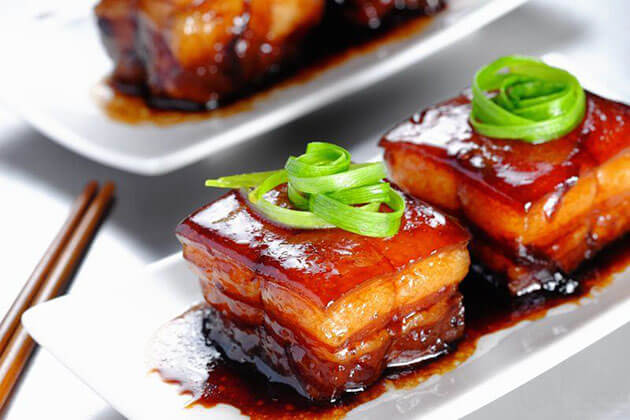 Beggar’s chicken is another of Hangzhou’s famous dish. The name come from a Chinses myth of a beggar and his stolen chicken, His accidental discovery of cooking the chicken helped him become rich and produced delicious food until today. The chicken is stuffed with ginseng, mushrooms, and other fried herbs, covered in lotus leaves and clay-roasted. Many tourists are fascinated by the tender chicken meat and the fragrant smell.

Wonton is Chinese traditional food on the winter solstice. Chinese people have followed this tradition for more than millenary. Today, the dish is normally served as the soup or sometimes deep-fried. The typical fillings of wontons are ground meat, chopped shrimps or the combination of them. You might have tried this food before but you will be delighted by the real Chinese wontons cooked by professional hands. 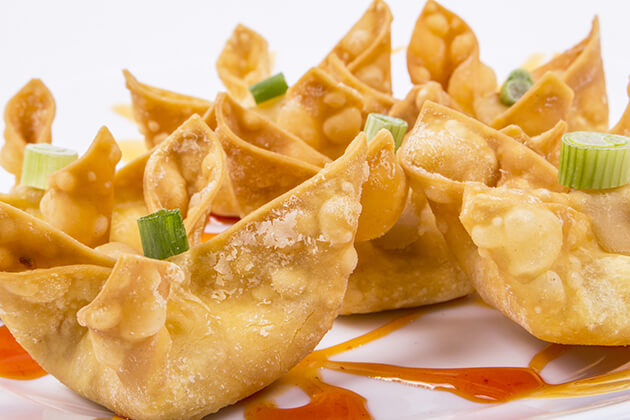 Dumplings are no strange to any Chinese cuisine lovers. Before stepping your foot in china, you might have enjoyed pork dumplings. Yet, here in china, your experience with dumplings will not stop at this point. Visit local restaurants devoted to making dumplings for generations to taste more varieties, such as shrimp, beef, chicken, vegetable mixed with other ingredients or even sweet. 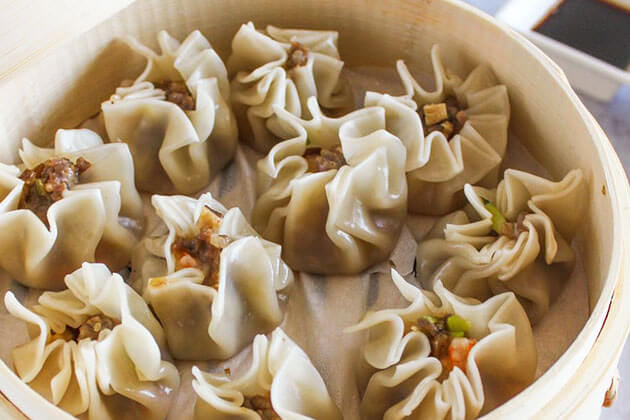