Have you ever had a Christmas in a foreign country like China? Christmas has become steadily popular in the mainland of China in the last two decades. In the major cities, it has been a big newly adopted festive tradition. Although there are some characteristics of Western Christmas which are remained, the local people in China make their style to celebrate this festival.

It is normal in China that many of the local people do not celebrate Christmas. You can see this in rural and minority areas because these places are not influenced by Western and Christian. In short, Christmas is not considered a public holiday in China.
On the other hand, commercial Christmas has been a major yearly event in the big cities in China. There are Christmas trees, lights, and decorations on the streets and in most department stores. The atmosphere of Christmas comes from the end of November as you can hear Christmas music playing and the noise of the crowds shopping for Christmas season promotions. A Chinese “Father Christmas” (圣诞老人 Shèngdàn Lǎorén) helps to make the scene complete.
Decorations are put up anywhere that wants to participate in the “international” celebration: hotels, businesses, schools, universities (particularly foreign language departments), even some tourist attractions.
Most Chinese people spend this happy Christmas occasion to get together with friends, relatives, and couples. Christmas parties can be celebrated at a friend’s house, a karaoke, McDonald’s, cafe, restaurant, or bar. In the festive atmosphere, people will enjoy the decorations and unusual music. The young generation in China consider it as a romantic holiday for couples and they often exchange gifts and date.

China’s Christians (about 1% of the population) generally celebrate Christmas religiously. While most China’s Christians people celebrate Christmas as the top event of the year, many Chinese people don’t know that Christmas is held to commemorate the birth of Jesus Christ or attach any religious significance to the festivities. This even becomes outranking Chinese New Year, songs and activities are prepared some weeks before.

In China, Christians celebrate by gathering to special church services, it sometimes typically becomes packed to capacity. On Christmas Eve, choral performances and the congregation are put on dance and drama performances. Christmas Eve in China means ‘Peaceful Evening’ (Ping’an Ye) from the translation of the carol “Silent Night”).
Carol singing is popular in Christian’s houses whereas in the streets you rarely see it. This is because at houses, they have the karaoke machine or they may employ. 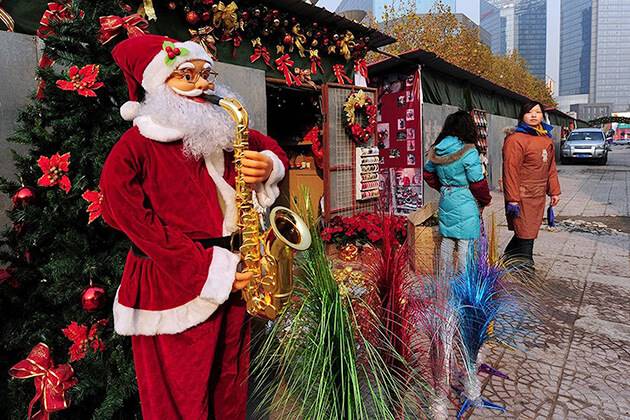 Tourists will find celebrations going on in most major cities, and domestic transportation and hotel rooms costs are some of the lowest of the year due to it being low season in China.

Expats who come from countries and cultures which celebrate Christmas will decorate their homes; try to generate a festive atmosphere as much like at home as possible. However, you can still feel homesick at this time of year.
If you wish to purchase the trappings of Christmas, these goods are becoming increasingly possible in China, particularly in the big cities with big malls and Christmas markets sell wrapping paper, cards, etc and there are import stores for Christmas decorations. Online shopping is increasingly the cheapest was to get e.g. a Christmas tree and decorations or even a turkey delivered to your door.
Expats often hold Christmas parties at homes or schools if they are teachers. The most important thing is to have a Christmas dinner with family, or at least with friends if you stay far away from family.

In general, Chinese people don’t expect to receive gifts at Christmas, except for ex-pats. Big shopping centers and malls will have a Santa to hand out gifts to children, but they usually do this on the same day. People do not have to wait for Christmas Day to open presents.
An apple giving tradition has evolvement in the country. “Ping” in the word 苹果 píngguǒ /ping-gwor/ (Apple) sounds like the word ‘peace’ in Mandarin, which is used for Christmas Eve (‘Peaceful Evening’), so people give and eat apples, particularly on Christmas Eve. Apples are printed on the skin with messages: ‘love’, love hearts, and ‘peace’ are popular messages (in Chinese).
Christmas cards (especially a variety of good ones without English mistakes etc.) can be difficult to find in China, but the situation is far better in big cities and online. E-cards are WeChat messages are popular ways of greeting each other.

You can enjoy traditional Christmas dinners at many large hotels and some Western restaurants.
Several Christmas foods are hard to find in China such as Brussels sprouts, Christmas puddings, or even turkeys. However, Internet shopping (Chinese sites like Taobao, rather than Amazon) and import stores in the big cities may come to the rescue. Many supermarkets, and supply chains like Walmart, may be able to help with the makings of a Christmas meal. In some Chinese cities like Beijing, there are so-called Christmas markets. 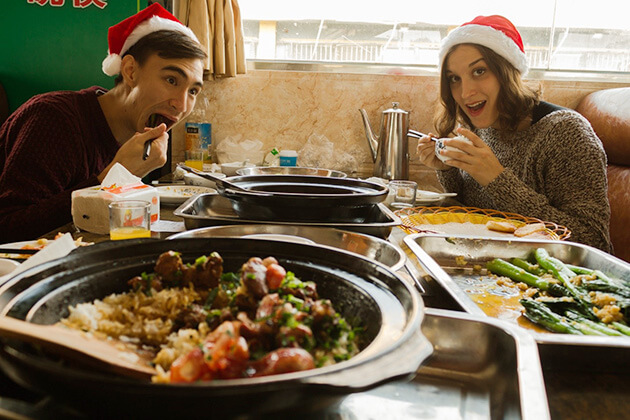 In Hong Kong, Christmas Day (December 25) is followed by Boxing Day (December 26) and they are both official public holidays. Boxing Day is a British traditional day. It is a day for shopping for after-holiday sales and for employers to give gifts to employees.

Hong Kong has its reputation of the best places in the world to travel for a festive Christmas atmosphere; coming here you can enjoy a two-day public holiday. Hong Kong is named WinterFest or one of the Top 10 places to have Christmas in the worldwide. Let’s travel to Hong Kong and experience fantastic Christmas displays, feasts and Christmas shopping.

Christmas in Beijing seems to be interesting because it is celebrated by Beijing’s younger generation. It is held as a happy occasion for social gatherings and presents exchange. However, most people still go to work on Christmas day unless it happens on the weekend. Christmas in Beijing is a busy commercial shopping season. A number of the major hotels offer special Christmas dinners, thus, people can remember the original meaning of Christmas at churches in Beijing.

Shanghai is a dynamic hub for world trade and where East meets West. In a modern, highly-tech city, local stores and distributors make use of this opportunity to sell their products. Most inner shops decorate shops to appeal to visitors during the holiday. Christmas carols are frequently heard every street. 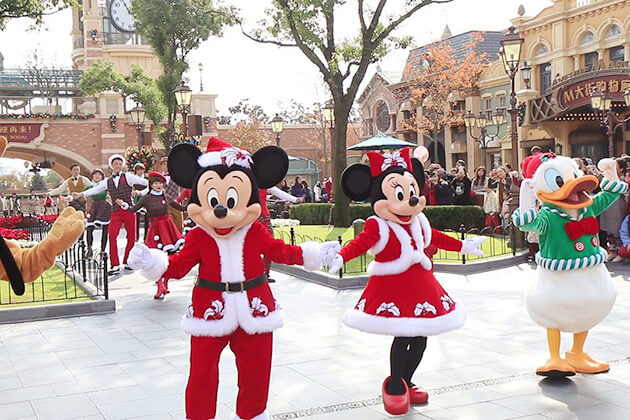 In this place, there are fewer Christians, therefore Christmas is less celebrated. One of the tourist attractions features of Guilin is karst landscape; however, it draws fewer foreign and domestic tourists in the winter and at the Christmas period.

Come to Taiwan, you will have a taste of Chinese-style Christmas decorations. Christmas is not an official holiday in Taiwan but it coincides with Constitution Day (Taiwan’s constitution day since 1947). The majority of the population just enjoy the decorations and displays in shops, and general commercialism, whereas, only 5% Christian celebrate Christmas in churches and homes across this island. 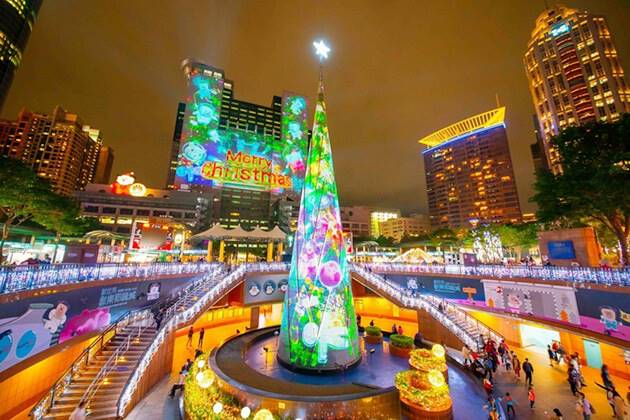 Different to Taiwan, Christmas Eve and Christmas Day are official public holidays in Macau. That two days and December 26 also are bank holidays.

If you travel to China during the Christmas period, we recommend you to go to one of the major cities to appreciate the unique atmosphere. Hong Kong is the top option. If you venture north as well, you could enjoy skiing around Beijing and the start of the Ice and Snow Festival in Harbin.
Maybe you want to know China’s tourism low season. As mentioned above, the end of December is winding down period of work for most mainland Chinese; Chinese people appear to be busy working before their big winter holidays at Chinese New Year. Thus, in the tourist low season, domestic transportation and room rates are often lower than usual.
International flights are more expensive due to students, overseas workers and foreigners traveling during the Christmas season overseas. 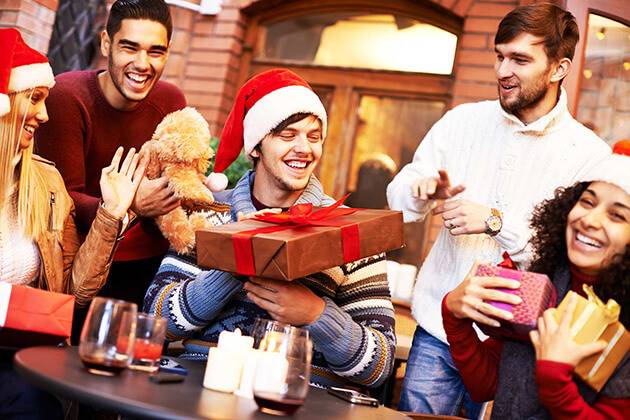